PPG is a single ride which links together every known categorised climb in the Peak District, and many ‘Top 100’ climbs surrounding it. The route is 600km long with over 13,000m of ascent. It includes at least 42 fearsome hills with gradients of between 10-25%. 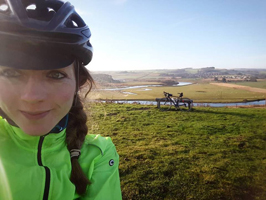 Started cycling 2016 when the idea of attempting the length of the country over 2 weeks was suggested to me (Lands End to John O’Groats). This experience got me hooked on the overwhelming satisfaction and adventure of cycling across beautiful landscapes over entire days, and the physical challenge associated with it.

In 2017, I then cycled 5200 miles solo from Nordkapp in the Norweigan Arctic, to the Croatian coast, raising funds for a Syrian aid charity. In 2018 I completed my first race, coast-to-coast across America, the 4200 mile Trans America Bike Race, fundraising for refugees in Merseyside. This year I attempted the Trans Atlantic Way but suffered a flare of a chronic tear in my knee at 620km… we shall see if the knee allows me to do this crazy route with the other girls! 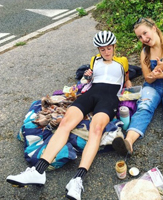 I’ve done a bit of everything since I bought my first road bike and am a big fan of big challenges.

In 2018 I broke the women’s Everesting ‘record’, clocking 12.5hours for the 8,848m of climbing needed. This year, I’ve had a first go at multi-day distance events, and completed All Points North (~900km) earlier in the year. I’m also partial to the odd road race, time trial or hill climb.

I love snack pods, malt loaf, and cafes that do all day breakfast. I might have bitten off more than I can chew with this event, but there’s only one way to find out, and I’m excited to give it a go alongside some really inspiring women in an incredibly beautiful place. 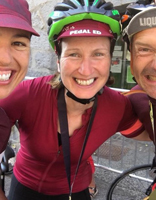 I’m Ang and I like to ride my bike a very long way. I use a bike for my everyday transport around Sheffield,  but I also ride a bike to escape from the city and explore the world.

I’m by no means the fittest, fastest or strongest woman on a bike, especially given the exceptional pedigree of riders that we have taking part in Pure Peak Grit, but I get a real sense of achievement from pushing myself to my own personal limits and expanding my comfort zone just that little bit further.

The Peak District is my playground so I am familiar with most of these hills already, but have never tackled them all in one ride! The time limit of 48 hours might be a bit of a stretch for me but i’ll certainly give it a go.

I’m also really keen on encouraging more women to enter the world of endurance cycling because I believe that we are all capable of so much more than we think we are. With this in mind, I set up the Peak Brevettes local group to bring like-minded women together for long rides and bike adventures, which is where ‘Team Pure Peak Grit’ was born.

I’ve had quite a few adventures on my bike over the years which you can read about on my blog: www.veloelle.com 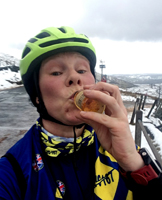 My cycling career to date:

Background in running and triathlon culminating in an Ironman in 2016 then was told I needed a knee replacement and was advised not to run so took up cycling seriously.

2018 knee still holding up so took to the hills as this is my favourite environment for cycling and completed the Marmotte Alps Grand Fondo.

2019 – amazingly my knee is still holding up so doing PBP in August and continue to ride in the hills as often as I can so really looking forward to the Peaks challenge!! 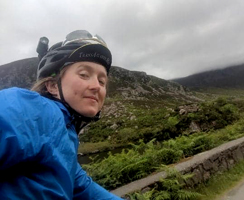 Bicycle courier in Manchester, who has fallen in love with adventure cycling after being initiated with some long tours… 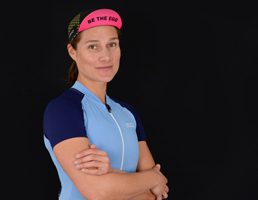 Flatlander who loves a good headwind battle, not afraid of a bit of rain, but struggles in the heat, scared of gravel and goes backwards on hills. But… what doesn’t kill you makes you stronger, so embarking on 3 hilly challenges this July, clocking up more elevation in a month than she would previously do in a year. 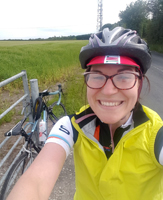 I largely cycle in my local area of Merseyside but love heading back to my native Yorkshire to seek out some hills! 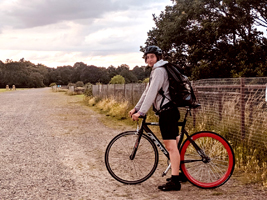 I’ve mostly cycled for leisure/fun/fitness/commuting and main mode of transport but never took it seriously/to the next level.

I started with an Olympic Distance Triathlon (Tri Windermere 2015), then got back on the bike March 2018 after almost 3 year hiatus after bike was stolen. Now I’ve been a full time bike courier in Manchester since July 2018, and am Manchester Team Captain for Stuart Delivery Ltd.

As of this year, a new member of Audax UK- a couple of audaxes completed: 120km and 200km. This is in preparation for my first race attempt, in just a few weeks: The Trans Continental.

I have been cycling for around 12 years, my first introduction into distance cycling being a self supported 10 day trip of LEJOG in 2012. I did a short stint of road racing with development team Biketreks in 2013 before going solo in pursuit of adventure and distance. In 2015 I rode the 1200km Paris-Brest-Paris brevet, a baptism of fire in my debut year of Audax.

Captivated by the Transcontinental Race, I cycled to Montenegro in 2016 as a volunteer at CP4 then in 2017 I raced TCR no.5. Last year I had great fun on the inaugural Race Across France challenge distance – a 1050km race across the Alps, finishing at Lake Annecy as 2nd lady. Most recently I did All Points North, finishing 3rd lady and 16th overall. I look forward to returning for APN 2020!

On the 1st July I’ll be taking part in Trans Alba, a 1700 km race around Scotland with 20,000m of climbing. All being well, this will leave a week of recovery before Pure Peak Grit, at least I’ll have found my climbing legs even if not fully recovered. Having spent 3 years living in Sheffield and exploring the peak district during my university days I feel ‘prepared’ for Pure Peak Grit. Still, I’ve only ridden a handful of the climbs in store and never in succession! The combined distance, elevation and 48 hour time limit will make this a tough challenge. 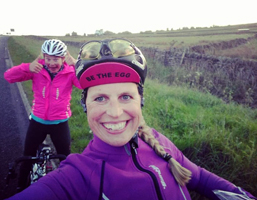 I started cycling again in my late twenties, initially to get to and from work and to keep my wife company, but gradually I fell in love with being on the bike. I now cycle almost every day – to get around, to spend time with friends, to have adventures and to try new challenges.

I started riding audaxes pretty much by accident about 4 years ago but quickly got addicted – as a slow and steady rider, the challenge of completing a set distance within a set time rather than racing appeals to me. I’ve completed two Randonneur Round the Year series (riding at least one 200km audax every month for twelve months consecutively) and three Super Randonneur series (at least one 200, 300, 400 and 600 event within a year) as well as finishing the 2017 London Edinburgh London 1400km.

SEE HOW IT ALL PLAYED OUT 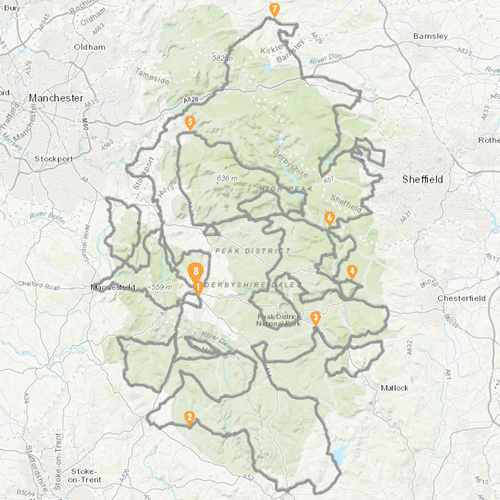 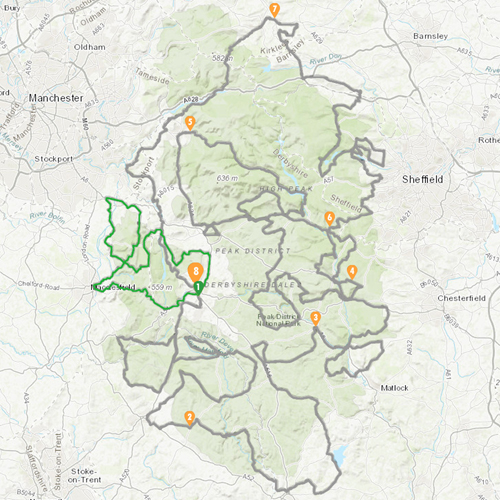 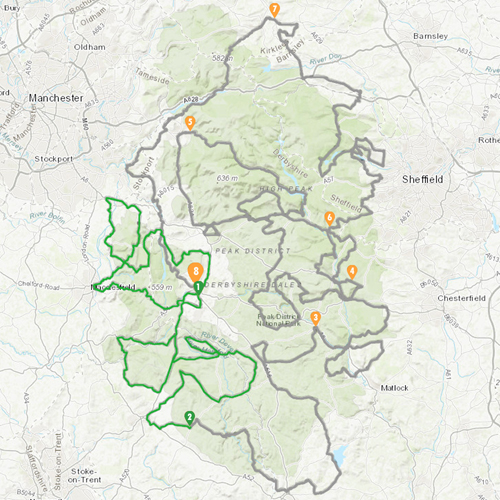 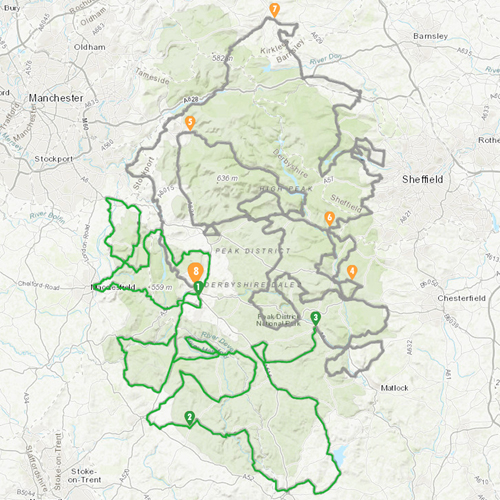 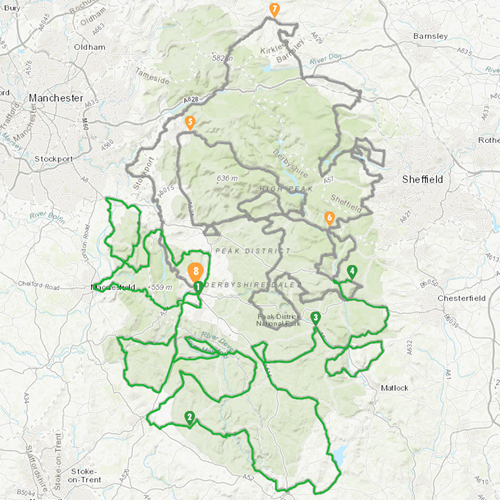 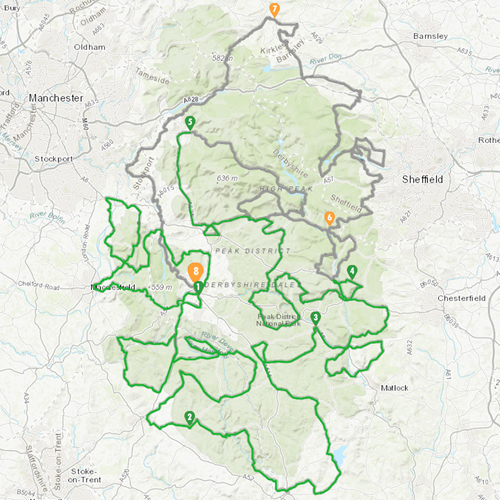 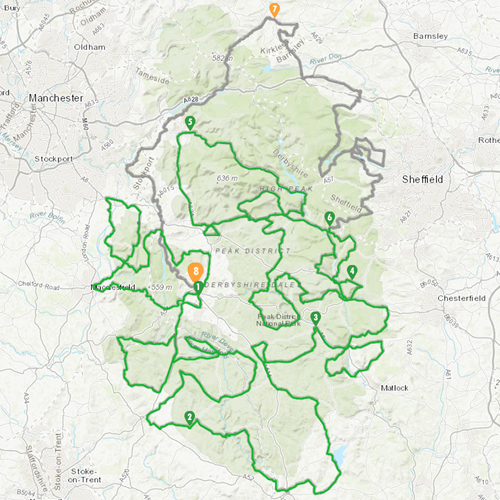 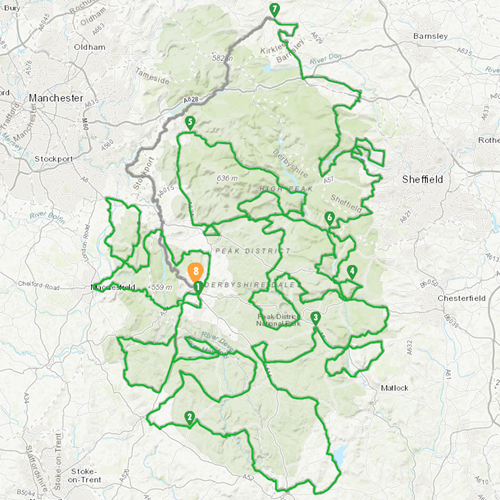 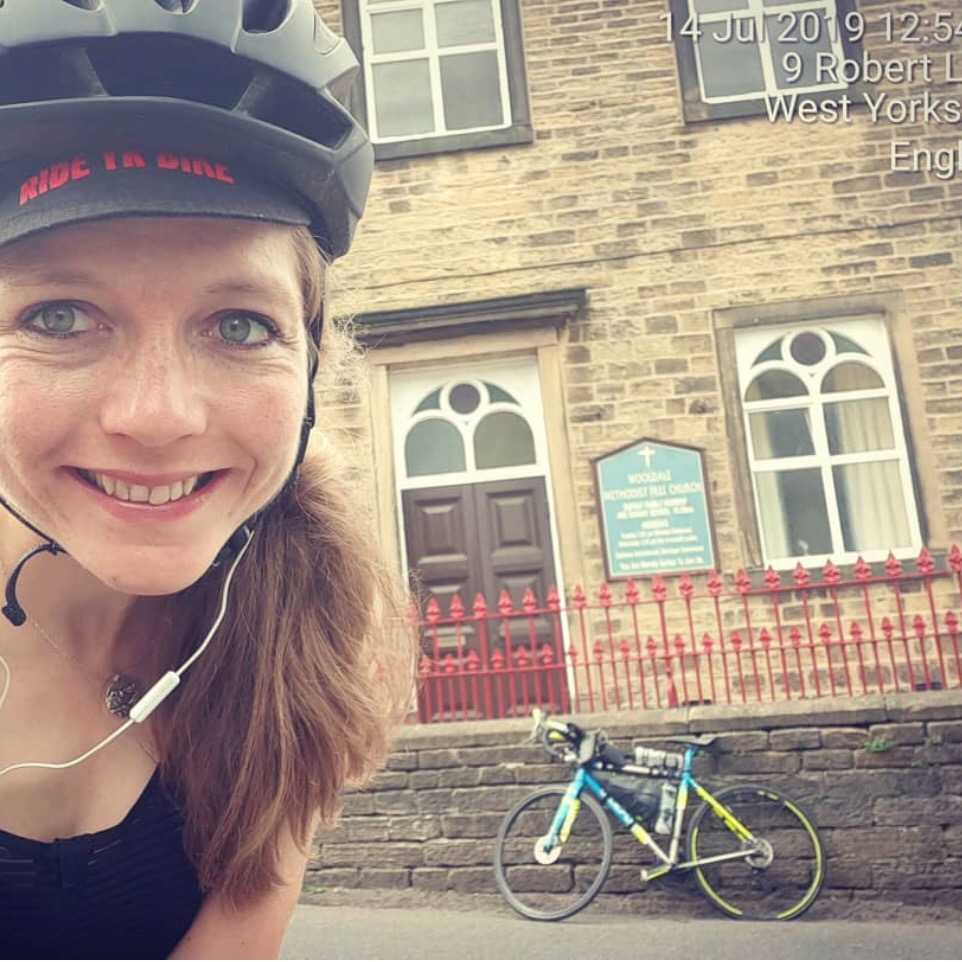 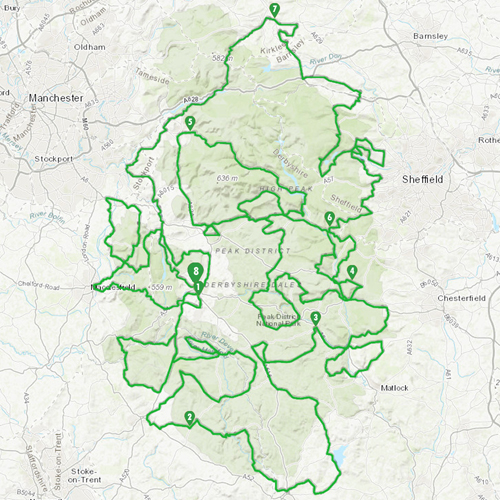 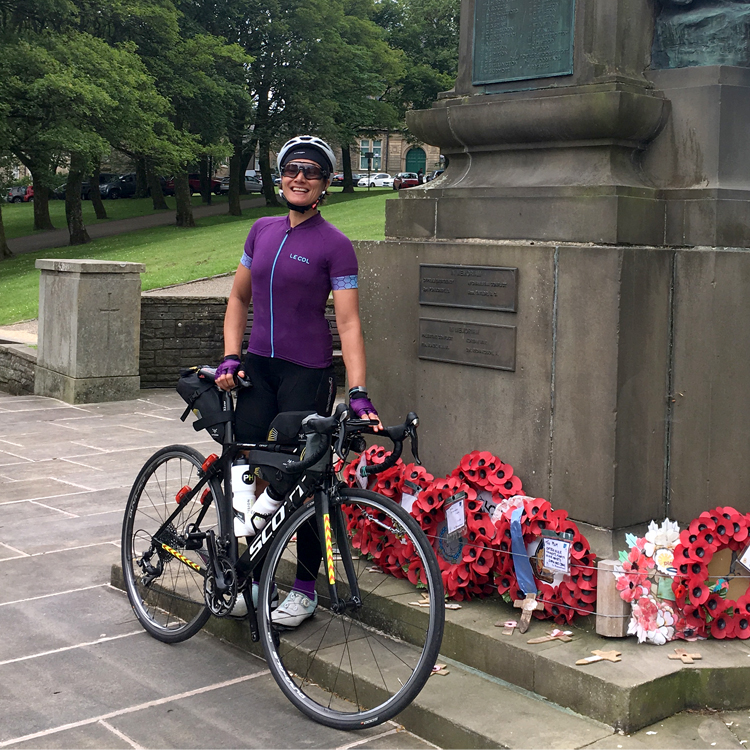 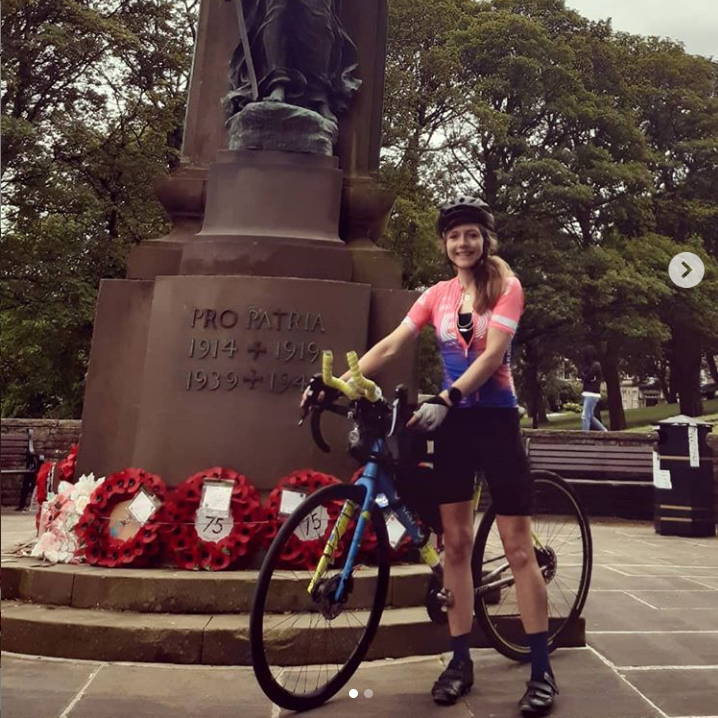 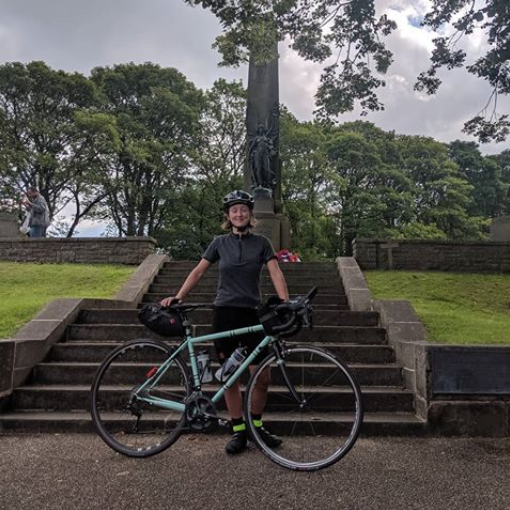 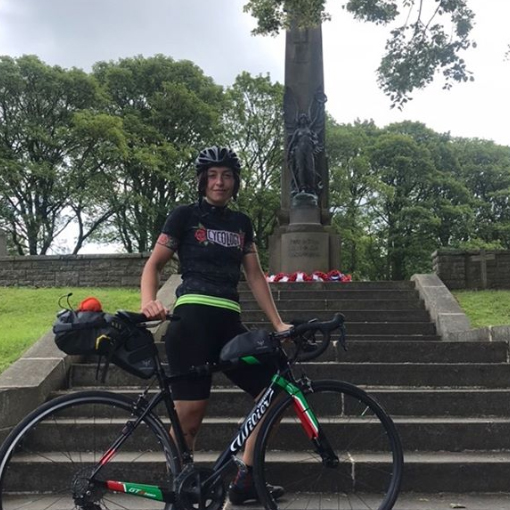 Special Thanks from Alaina

A special thanks from Alaina, to people who I am eternally grateful for the support and help they have selflessly offered in making Pure Peak Grit happen: